Significant statement from DWP re permitted work and workfare

Please see the attached letter from Mark Hoban MP, Minister for Employment, to Joan Ruddock MP, following our letter to her of 5th December.

ESA Response from the DWP

The key paragraph is the last one:

“There is already guidance to support advisers and providers to identify work-related activity which is reasonable to the individual’s circumstances. We will strengthen this to make it clear that work experience and work placements are not recommended for claimants undertaking permitted work, given that they are already engaged in meaningful activity.”

I hope you agree that this is very good news for people working on the Involvement Register.

We recommend that you take a copy of this letter to any work-focussed interviews.

Yesterday we published a visual summary of the findings of the latest CQC MHA Annual Report.

You can download the full report, an easy read version, a summary and an audio version from here: http://www.cqc.org.uk/public/reports-surveys-and-reviews/reports/mental-health-act-annual-report-2011/12 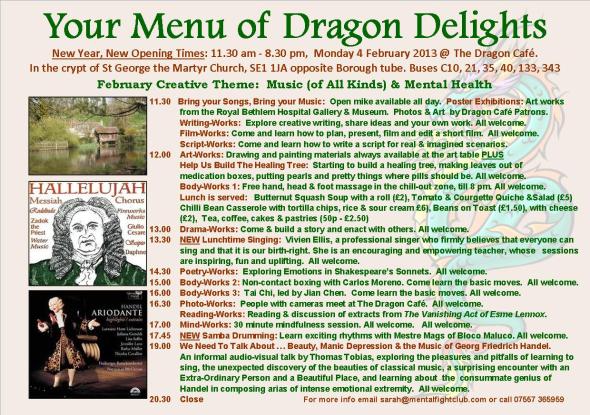 Some people need to be detained, but they shouldn’t be held for months longer than necessary.

It’s a sad but [un]avoidable fact that sometimes, people with mental health problems become so unwell that they need to be detained against their will.

It should be happening a lot less than it currently does, but the fact remains that there will always be a need for some form of secure care for people who pose a risk to others, or much more likely, to themselves.

As long as this kind of care exists, we all have an interest in ensuring that powers to deprive someone of their liberty are used in a way that is just, compassionate and effective.

Mental illness can affect anyone. If it was your sibling, your mother or your child who became ill, you would rightly expect these powers to be exercised with extreme caution, and if detention really was the only option, that they would receive the best possible treatment and care.

Unfortunately, according to a report out today from the Care Quality Commission on how the Mental Health Act is being used in practice, this is not what’s happening.

The Annual Mental Health Act Report has raised concerns that too many people are being detained unnecessarily and that the care and treatment they receive once they get there, is often found seriously lacking.

There are around 7-8,000 people detained under the Mental Health Act in secure hospitals at any one time. These include high secure hospitals such as Broadmoor, Rampton and Ashworth, although the majority of patients are in medium and low secure facilities. This costs us £1.2 billion a year, making up almost 20% of the total NHS adult mental health budget.

My role as a commissioner on a year-long enquiry into the state of care for schizophrenia in 2012, for me, really brought into sharp focus how disproportionate this spending is.

The truth is, we have a risk-averse system which is clearly not getting the balance right. Resources which could be keeping people well in the community, and preventing them from ever being sectioned in the first place, are being consumed by expensive secure care.

The Commission identified huge amounts of money being wasted because people are getting stuck in a system which is easy to get sucked into, but can be incredibly hard to get out of. We heard far too many examples of people who were judged by psychiatrists to be clinically well enough to leave secure care but who continued to be locked up, because of red tape.

A just society cannot stand by while people who have both paid the penalty for any offence they have committed and are judged well enough to rejoin the community, are held against their will.

This is not only unfair and potentially damaging to the individual – it is also wasting money which could be used to prevent others reaching this acute stage of illness.

There are three aspects of the system that need to change. Firstly, more investment in early intervention is key. Many people who end up in secure care have a long history of mental illness, which has not been effectively treated at an earlier stage. If the system did have the proper resources to support people when they first became ill, huge amounts of money could be saved and it would divert people away from patterns of offending which lead them to prison or secure care.

Studies show that for every £1 invested in early intervention for conduct disorder for example, society saves £8 in the long term.

The second change is to overhaul the system for planning secure care. Services need to be designed carefully, so that they promote hope and recovery and allow people to move through the system and, when they’re well enough, back to the community.

This won’t be easy. Responsibility is fragmented between different parts of the NHS and the Ministry of Justice – but this does not mean it can’t be done. There is too much at stake to leave things as they are.

The final issue is one of culture.  As Sir Robin Murray, the chair of The Schizophrenia Commission put it, psychiatrists are not sacked for keeping people in hospital unnecessarily, but they are sacked for letting people out too soon.

This is not to play down risk assessment, which is an important part of the role of all practitioners working in the mental health system.  It does however, call into question whether it’s possible to get the balance between risk and recovery right under these conditions.

When you add into the mix, sections of the media who only seem to report on mental health when it’s linked to a horrific crime, you do not have a recipe for logical, rational debate.

This is simply not good enough and we can do much better. There’s no doubt some people do need to be detained, but they should be able to  expect effective treatment rather than to be held for months longer than necessary.

We have allowed a mental health system to evolve which is far too timid in its aspirations for people with severe mental illness and has focussed on managing risk, at the expense of quality care and treatment.

#RT via Bridget via http://www.independent.co.uk

To be part of the group you will need:

To find out more, please read the attached documents

The Underground Edition at the Charles Dickens Museum

Cooltan Arts’ wonderful project The Dickens News has worked hard during Dickens bicentenary and is now moving towards its finale in 2013. We are delighted to invite you to the final exhibition in our Dickens News series –‘The Underground Edition’, which celebrates the life and work of Charles Dickens, with a contemporary creative twist and social comment to boot! As a finale to the Dickens News Series, this exhibition will be an investigation into the underbelly of Victorian London. Original artwork, textile, sound art, and the written word will tell the secret histories of those outside of society in the age of Dickens.

This exhibition will support Dickens’ interest in social reform by giving a voice to the diverse communities found in the multi-cultural city of London. The richness of London’s diversity is  illustrated with historical accounts of local  black and Jewish communities, reviews of Dickens’ essays on Africa, slavery & the  black population in London, child labour, the mentally ill, the poor and destitute, Victorian recyclers, and lesbian, gay and trans stories are drawn together to weave the underground edition of Dickens work.

Interesting and / or useful links